Rough.  The single word that can describe the past four weeks of my training.  That is the crazy thing about distance running…one minute you can be dominating workouts and the next minute you can hit rock bottom.  The combination of work, school and training finally took a tiny toll on my body about mid-June and it was a very humbling few weeks.  There were a few days when I was struggling to run 4 miles and I wanted to take a sabbatical from running (if thats even a real thing).  Those few weeks made me realize that you can do anything you want to in life but you can’t do everything…your body needs rest and recovery and can’t always be going at 120%.

The good news is, after a solid two weeks of staying low key in Toledo, my body came around and I feel good finally!  I went from struggling through 4 miles to knocking out 20-22 mile long runs but I also forced myself to CHILL out.  After my marathon debut, I decided that I needed to seek out some coaching because my “crazy switch” was officially turned back on and I knew that I would make choices in my training that weren’t the smartest. It was all destiny…about two weeks prior to my marathon, I met Tony Houchin who is a good friend of the head coach I work for at UT.  After spending a few hours with him and talking about his training philosophy when it came to the marathon, I knew we would get along perfect.  His passion for coaching is unbelievable but he was very down to earth type of guy.  After talking with him for a few hours, I remember thinking that he is the type of coach I would have ran for in college (if he would have ever recruited me 😉 ).  Post-marathon, I decided to seek out Tony’s help and couldn’t be more happy.  When I was training on my own, I had absolutely NO pressure to perform because no one was investing time into me and I was just doing my own thing.  Getting a coach initially scared me but the relationships and communication is great with Tony even though he coaches me long distance.

Other big news…I signed up for my next marathon!!!  My family has been bugging me a ton but I have decided to run the California International Marathon in December!  I wanted to find a race after the collegiate cross country season was completed so that I didn’t have to miss any races/recruiting and I didn’t want to have to split my attention during race week.  CIM has historically proved to be a great race with a lot of Olympic Trials Qualifiers because it is a net downhill course.  I will start studying the course now so that there isn’t any wrong turns this time around…

My 27.2 mile marathon debut has given me more fire and determination for December…my dream as a 12 year old girl was within reach and now I just think about that whenever a workout or long run gets tough…I never want to have that feeling again after a race.

View all posts by sjblusk

Every journey is different and every story deserves to be shared.

I’m excited to share my story – the joys, the tears, the heartbreak and the triumphs. It is my goal share pieces of my life (both personal and running) with you – the good, the bad and the ugly – I want to share the things that are hard to talk about because lets be real, everyone struggles but running has a way of bringing people together. 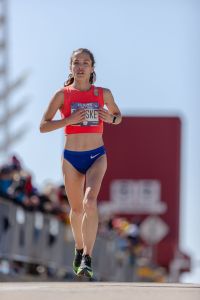